Hello, my little unicorns of the world! This blog is rising from the dead, y’all! Anyway, I recently traveled to the city of Guanajuato in central México where I got to spend Día de Muertos — you know, only one of the most important holidays in Mexican culture. And I’m breaking this topic up into two parts because wow, there’s so much to talk about!

In part one, I’m gonna talk to you about what spending a world-renowned holiday like Día de Muertos in the heart of México was like. And in part two, I’ll give you the details so you can do this yourself, if you ever wish to witness this magnificent holiday live and in color. I’ll even throw in the part of the trip when a taxi driver took $1,000 pesos from our dumb asses and some tips that might help you plan your own trip to the magical city of Guanajuato!

A MORE THAN 1,000-YEAR-OLD TRADITION
Día de Muertos has been one of my favorite holidays ever since I can remember. I grew up in Ciudad Juárez, Chihuahua, México, and attended a catholic elementary school where one of the most important things I learned were traditions. I remember that every year, we’d make altars for Día de Muertos and we’d have a big kermés (a fair or bazaar) that the whole school would attend on November 1. There’d be food stalls with elotes, gorditas, tacos, enchiladas and many more delicious traditional Mexican dishes; colors, flowers, music and people celebrating; and so many altars to celebrate the lives of those we’ve lost. 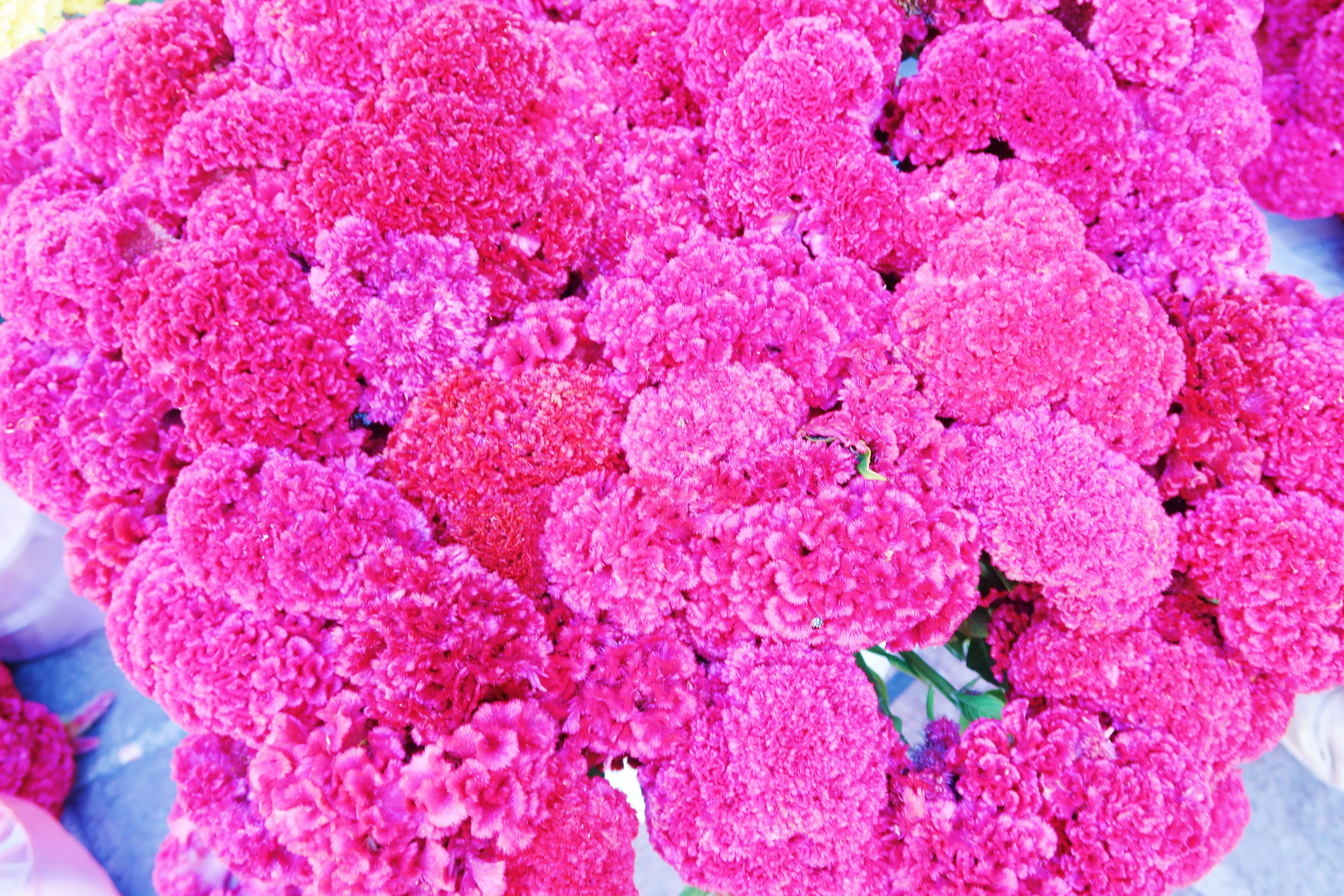 This pre-Hispanic Aztec, Toltec and Nahua tradition is thousands of years old. It was born as a celebration and commemoration of the lives of those who’ve moved on to the beyond — wherever that may be. In those cultures, they believed that it was disrespectful to mourn the dead, and that’s why they created this holiday that instead celebrates their lives. And on the Day of the Dead, it is believed that the dead return to walk among us.

The most-easily recognizable part of this celebration is the ofrendas or altars that are set up with different levels and elements as a way of welcoming the dead back to the world of the living. Every part of the altar carries symbolism and meaning — from the water that’ll quench the dead’s thirst from the long journey to the deceased’s favorite alcohol that are placed on the altar to create a familiar atmosphere for their return.

You’ll also see flores de cempasúchil or golden marigolds, whose petals are used to create a path that’ll guide the dead back to their resting place. And of course you can’t forget the photos of the deceased and their favorite dish. I remember I used to like eating the salt from the altars when I was in elementary school but don’t tell anybody. Don’t you dare ask about my sodium levels, OK!? 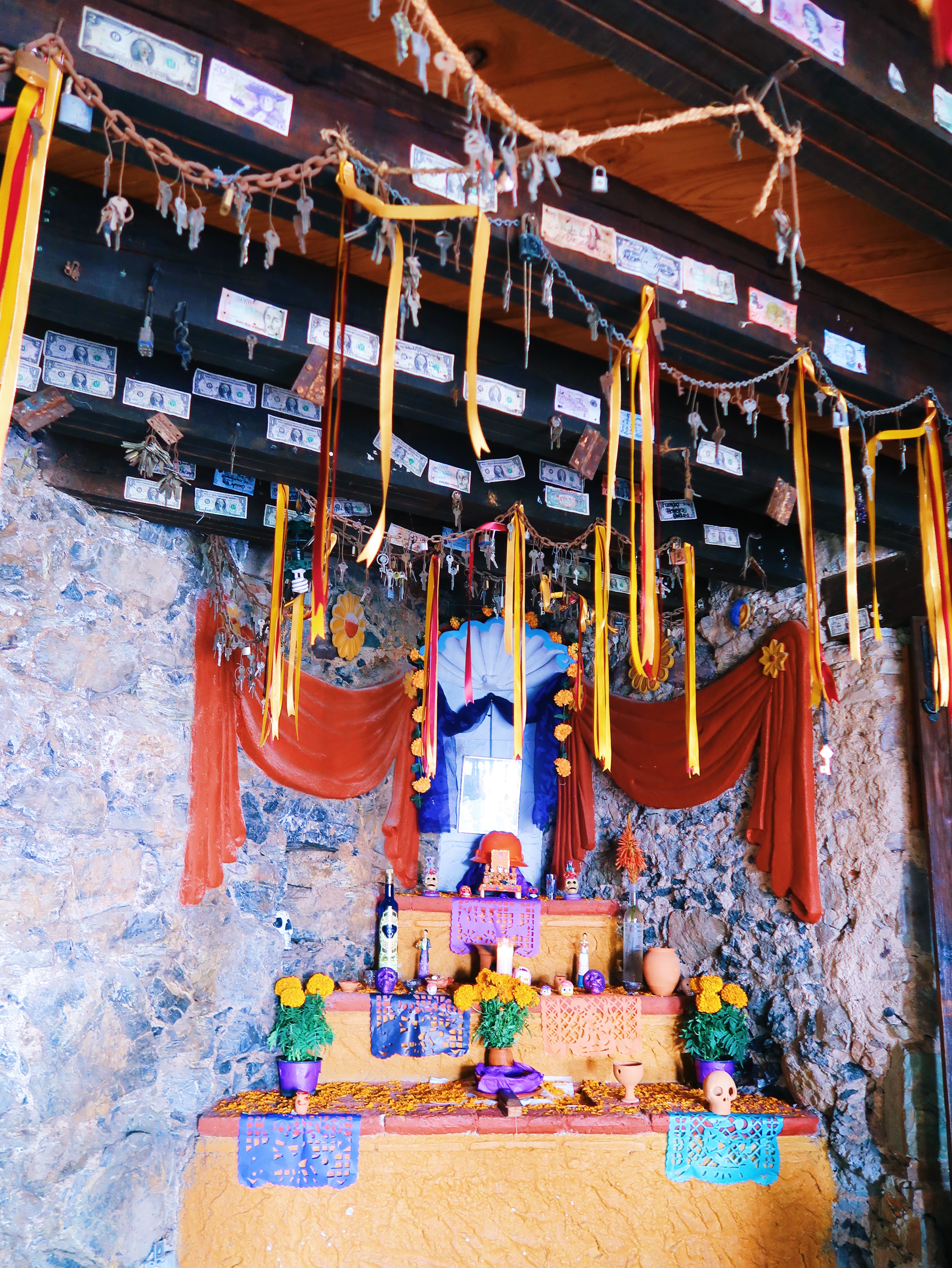 DÍA DE MUERTOS IN GUANAJUATO
Walking around city, inside museums and homes, you’ll see so many of these ofrendas to welcome the dead back to our world. We saw beautiful altars at the Diego Rivera Museum and the Don Quixote Iconographic Museum. NOTE: Both of these were closed to the public, except for the altars in the lobbies, because November 1 is a holiday. So, make sure to plan your visit to the museums on another day if you’ll be in town around that time! 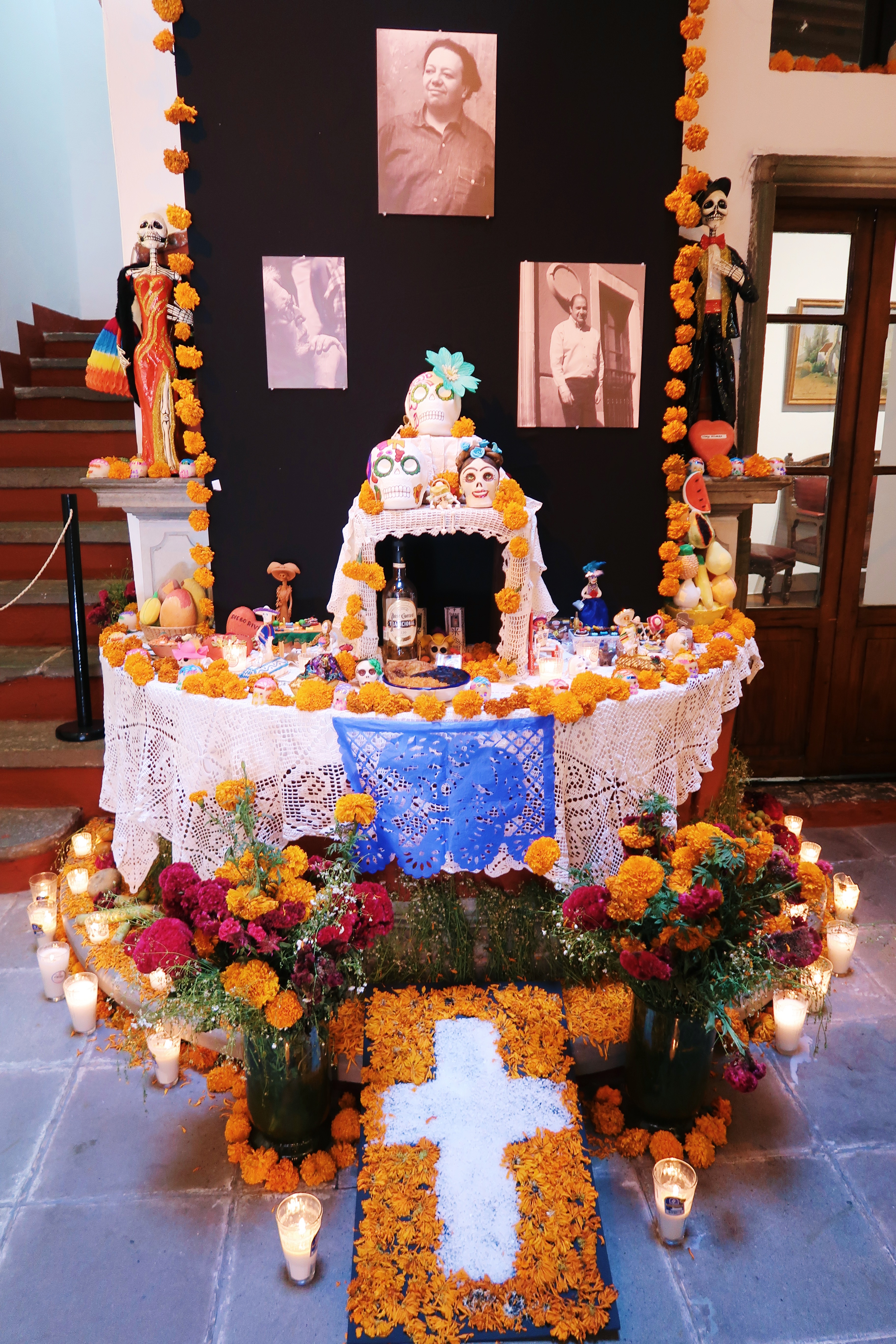 This social holiday brings people in costumes out to the streets all day and night. I mean, we really saw people dressed up as Catrinas the entire weekend we were there. It was delightful! We also saw many beautiful, colorful tapetes, or carpets, which are intricate pictures that are created by students, artists and regular people in the streets with sawdust, sand, flower petals, powder pigments, seeds, etc. They can depict anything from defunct artists to alebrijes and La Muerte herself. 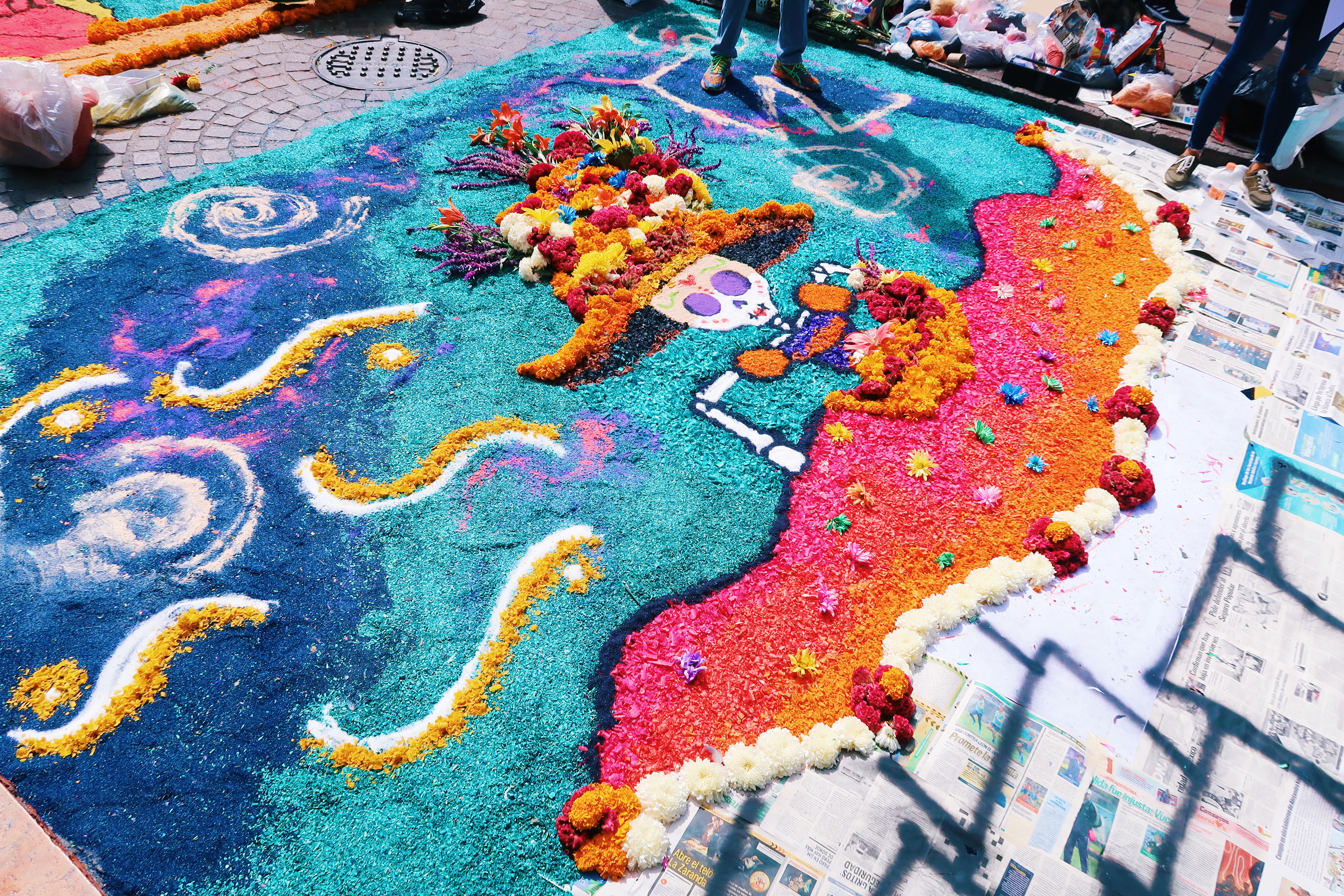 CELEBRATING THE DEAD LITERALLY UNDERGROUND
One of the underground streets in Guanajuato — what used to be a river long ago — hosts the yearly Day of the Dead festival titled “Un Túnel de Tradición” (a tunnel of tradition). Walking through the large crowds of people in the underground street, we saw a multitude of vendors selling Mexican craft beer, fancy chocolate and candy,  eclectic handmade jewelry, clothes, unique-looking and colorful accessories, delicious nieve de garrafa (hand-churned ice cream), so many varieties of pan de muerto (bread of the dead; NOTE: not made from actual dead people), art, and more. They even had food trucks and bars set up throughout the 1.5 kilometer stretch of the tunnel. 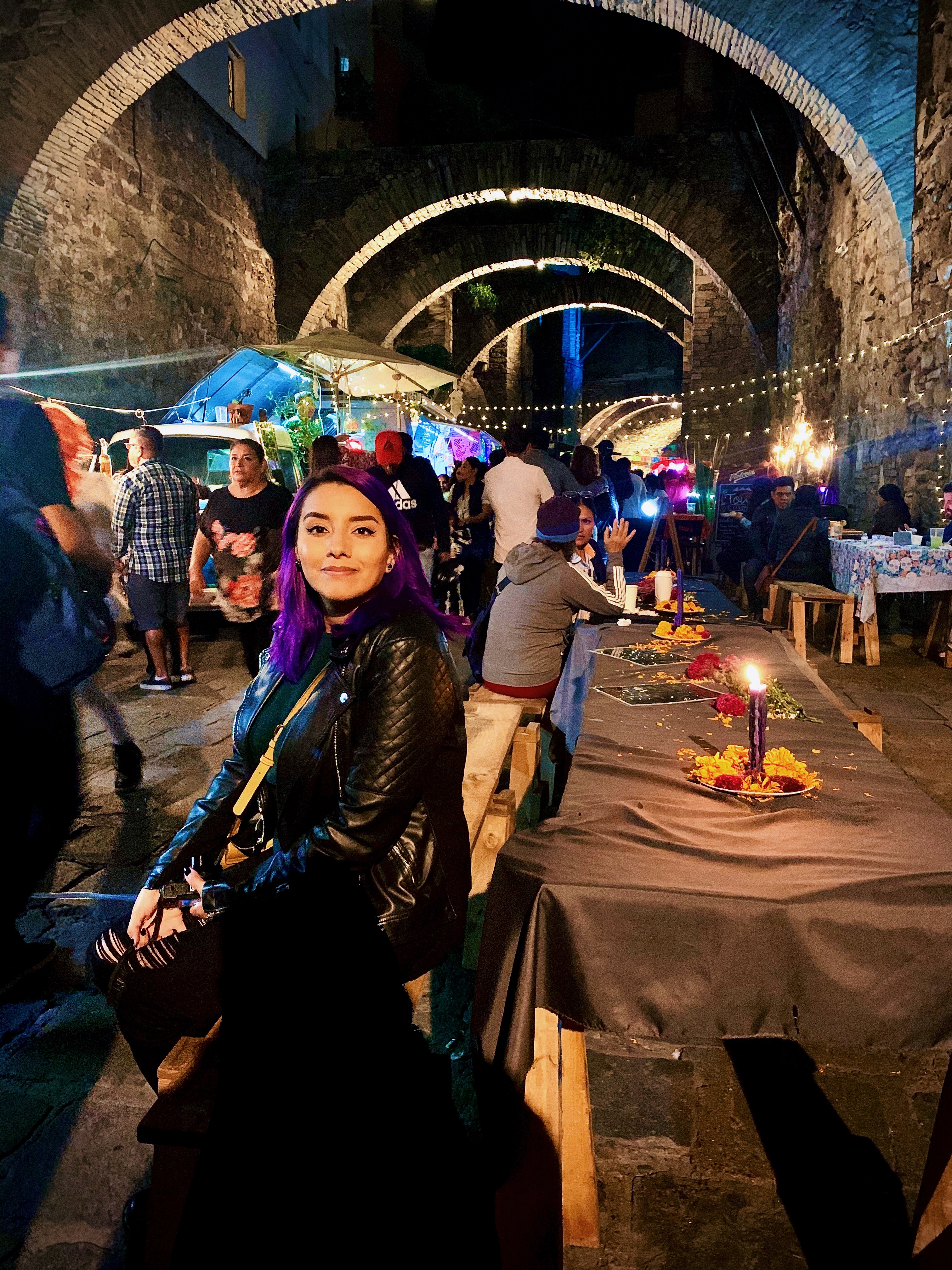 EN EL TÚNEL DE TRADICIÓN | AT THE TUNNEL OF TRADITION

Why do I look like that, you ask? Yeah, I don’t do great in big crowds. But that’s neither here nor there. This festival lasts from October 30 to November 3 with different events set up throughout each day and night. On top of the food, vendors and more, they even have a screen set up where they screened Pixar’s Coco on the last day. 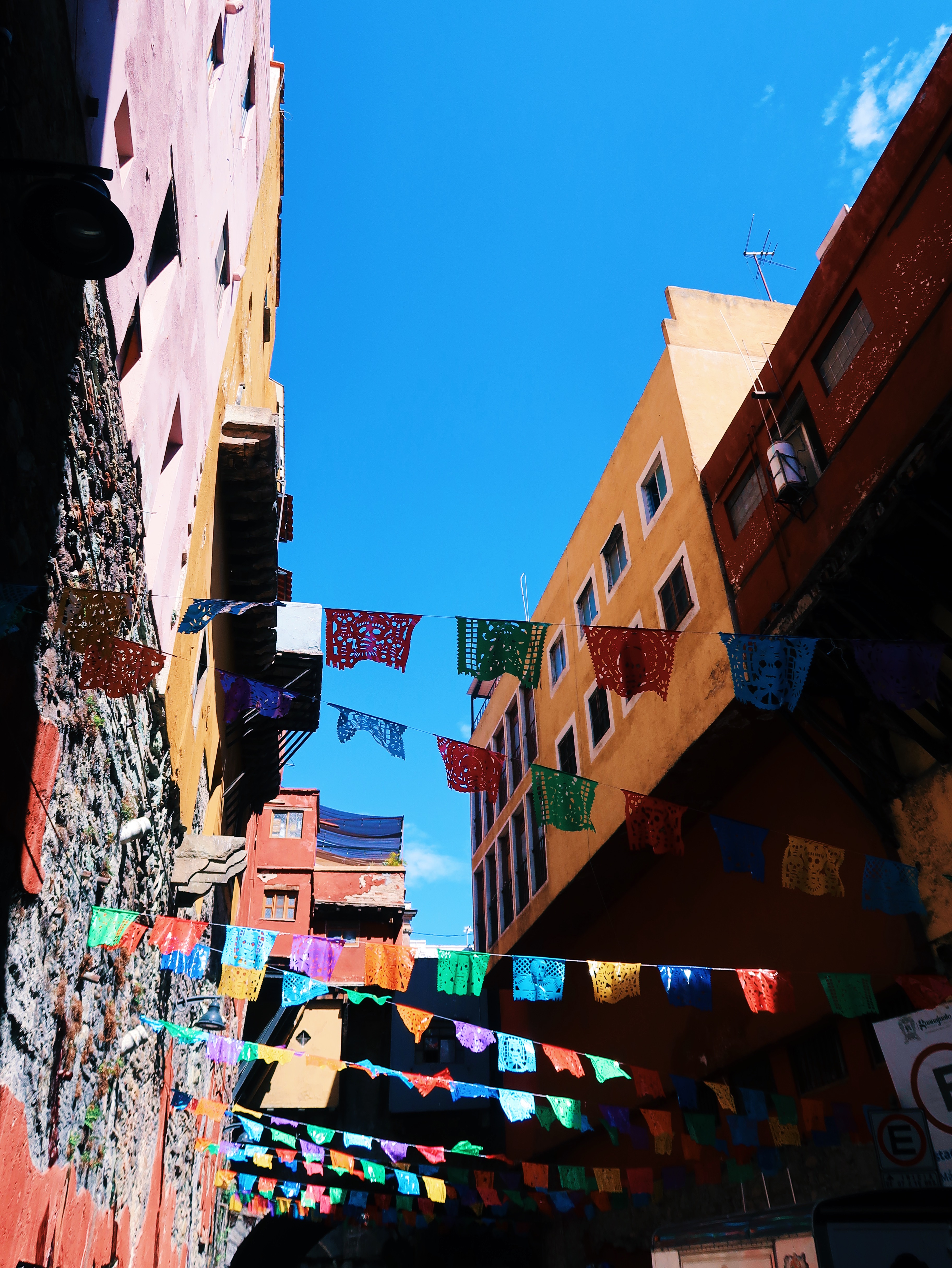 The second day of the underground festival saw a Catrina contest where I got to see some of the most amazingly intricate Catrina costumes and makeup that I have ever seen. (Find more on who the hell La Calavera Catrina is below!) The details and materials and the thought put into each and every one of these costumes was obvious and totally admirable. I was in complete awe at how beautiful all of the costumes were. I mean, seriously, look at these little babies completely serving us LEWKS! 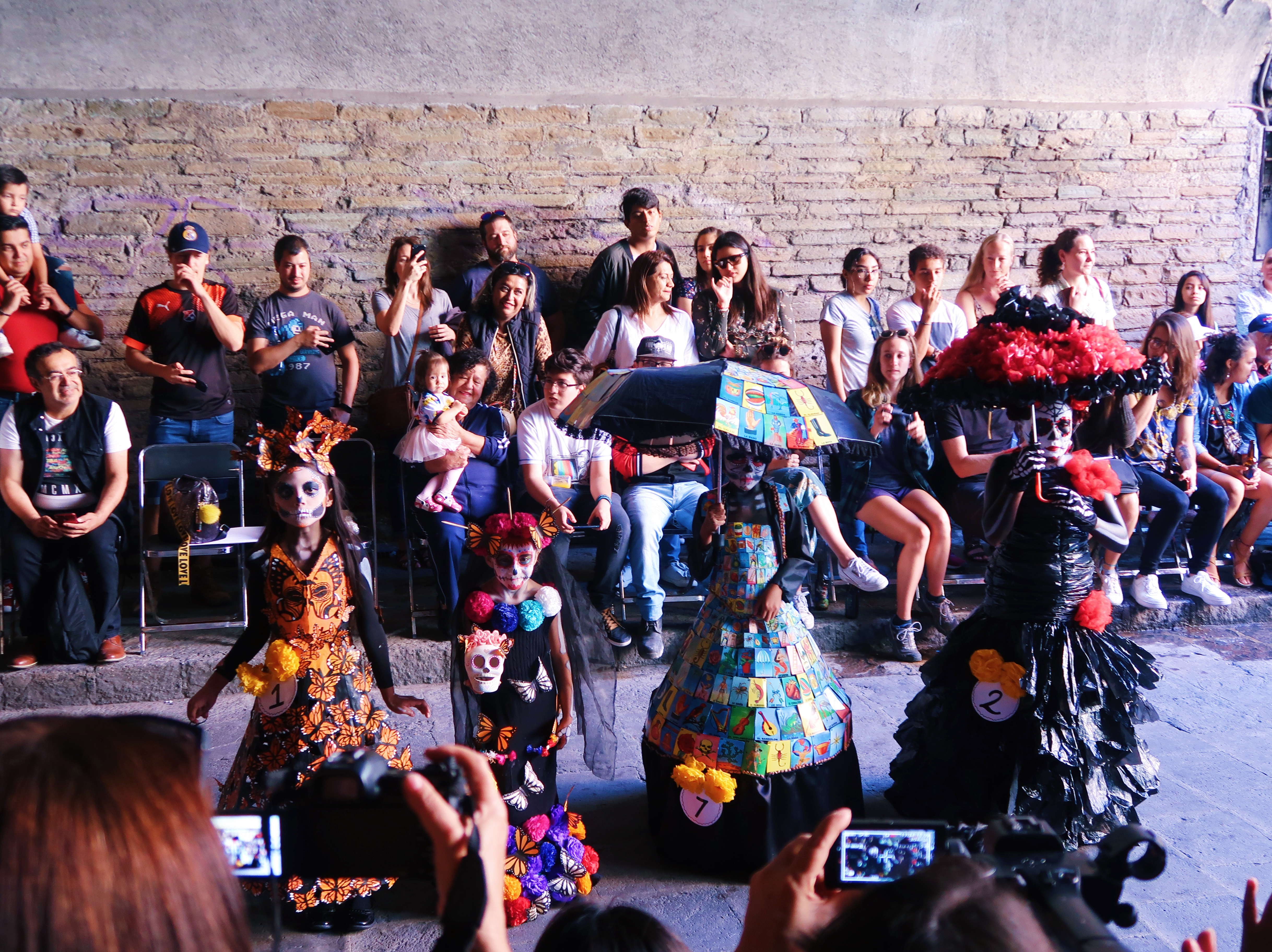 La Calavera Catrina, a quintessential character known by many names such as Mexico’s Grand Dame of Death, is an elegantly dressed female skeleton adorned with an over-the-top plume hat. She was created and brought into her current recognition in an etching by the father of Mexican printmaking Jose Guadalupe Posada in the early 1900s. However, the Lady of the Dead has been seen in history going back as early as the Aztec era. Among her many meanings in Mexican culture, she represents the ability to laugh at death itself and the fact that in the end, we are all the same — perhaps just bones — regardless of our material riches or lack thereof. And that’s the tea! 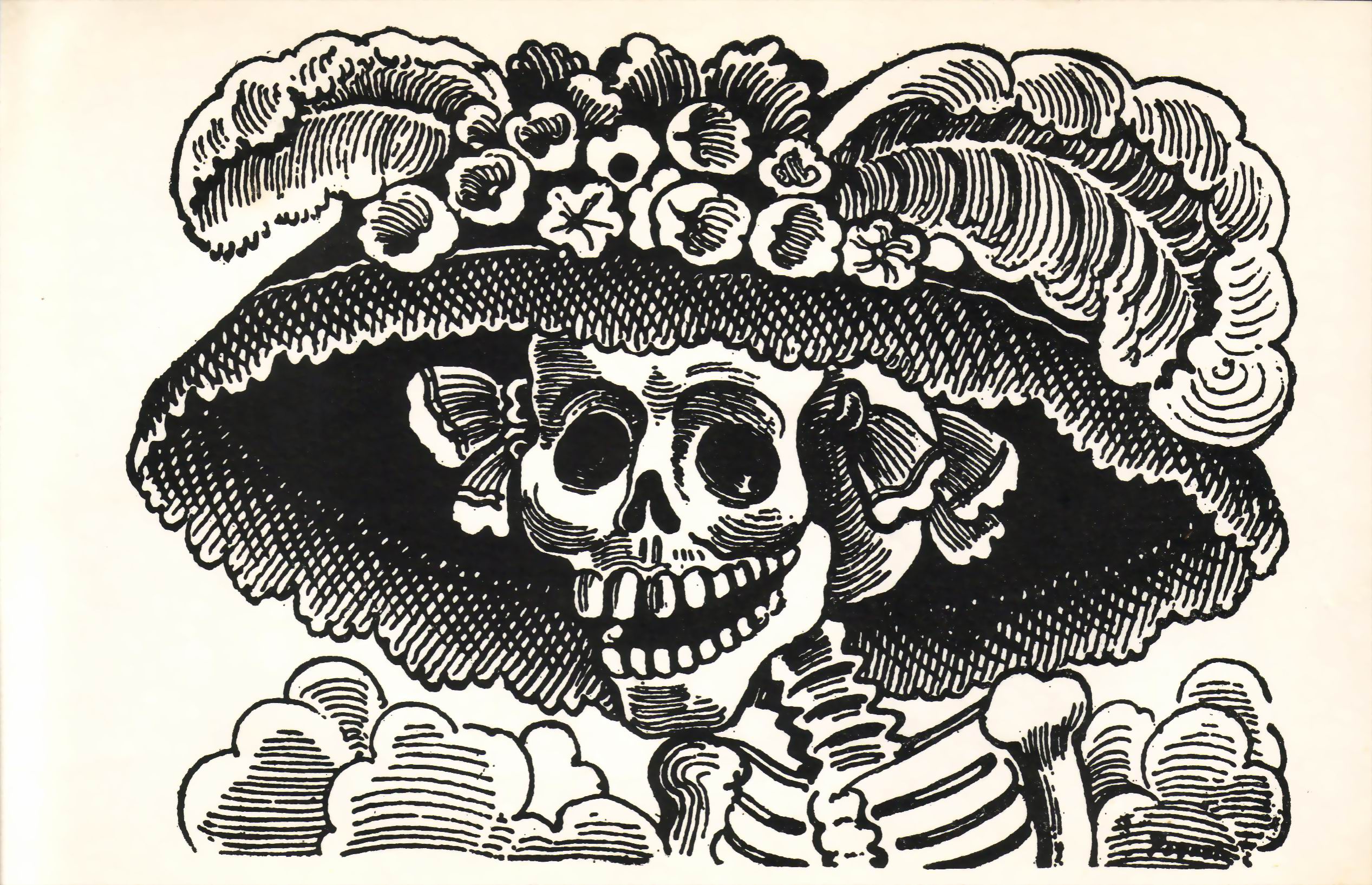 Guanajuato is also famous for their mummies. Yep, they have a museum of mummified bodies from a cholera outbreak in 1833. WHY AND HOW? I knoooow. But that’s a story for another day. Anyway, these mummies are taken out of their usual resting place at the museum that is frequented by thousands of people yearly and are brought down to be displayed at the subterranean festival. There are even multiple Mexican films that feature Mexican heroes, like the iconic luchador El Santo or the comedy character Capulina, fighting the mummies. Gawd, you gotta love Mexican folklore. 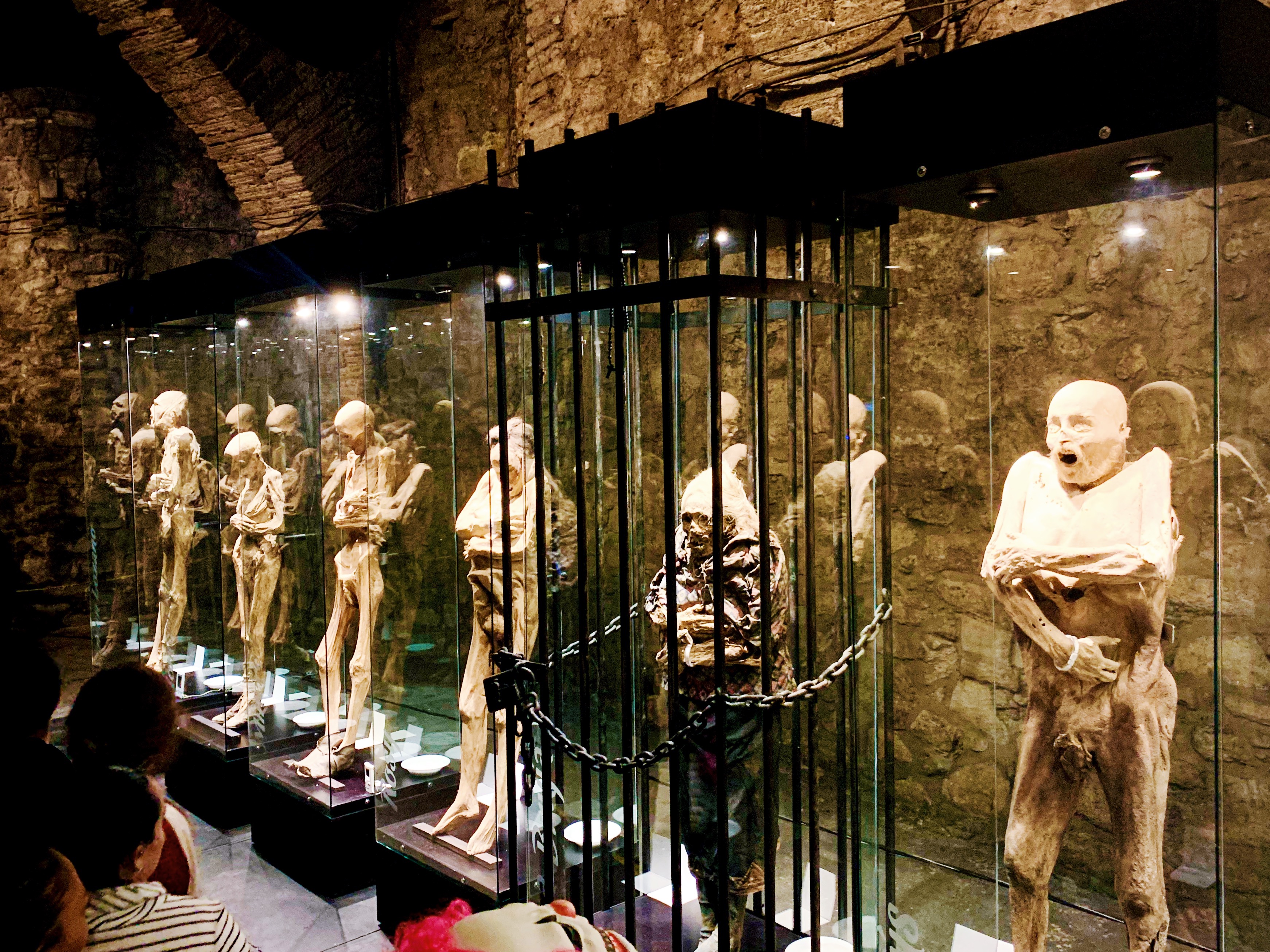 Creepy, right? Well, let me take that slightly uncomfortable feeling up a notch for you right now. You see the one that’s caged up and chained up? Well, legend says that she was a witch named Carmen who supposedly sold her soul to the devil in exchange for eternal youth. Rumor says that the metal bars are there to cut off her powers … but I don’t buy that. I’d probably befriend her and ask her to teach me her shit if we’re being honest. #FREECARMEN 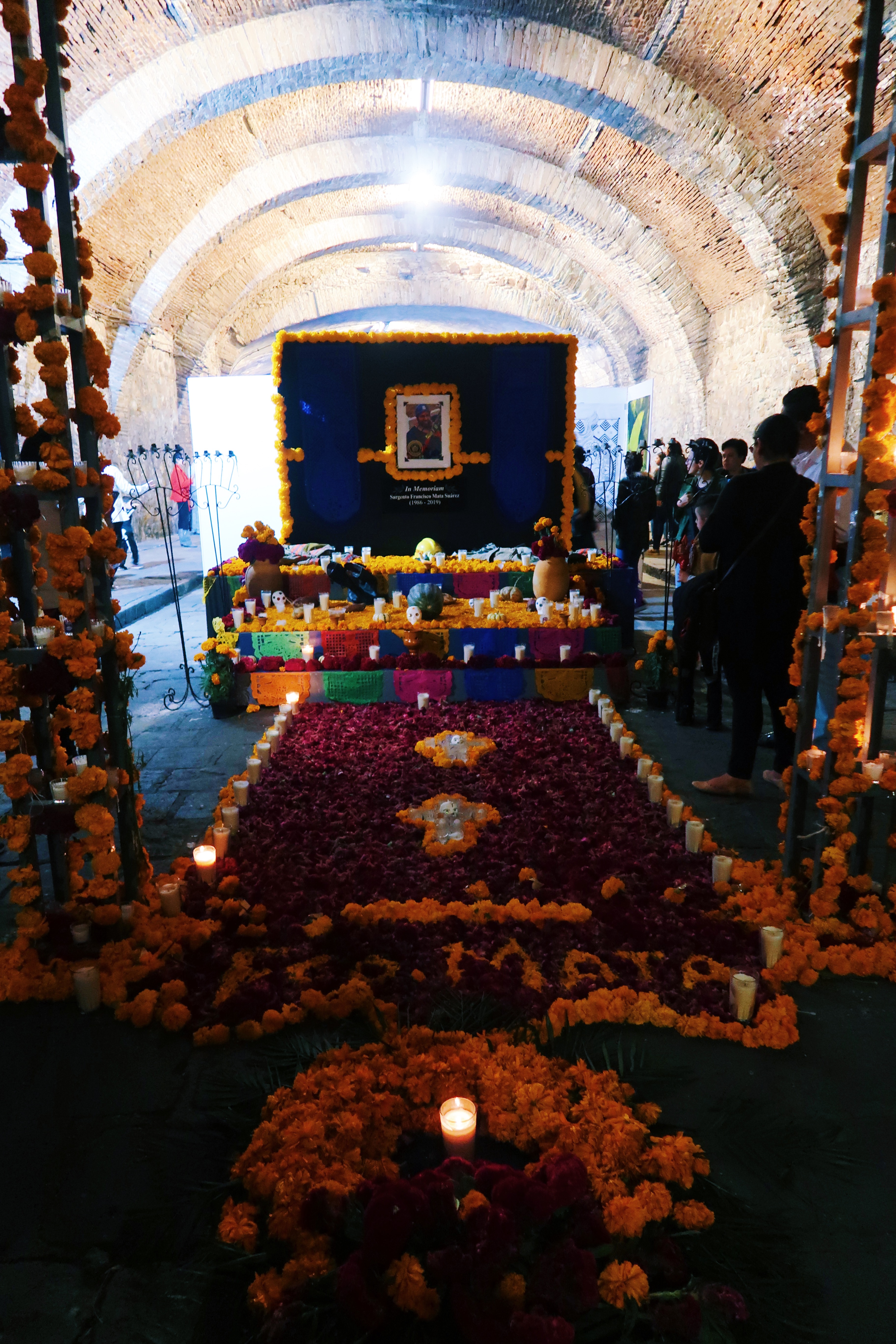 There was also a single random coffin displayed at the festival. She was definitely an open-casket girl and people were lining up to take a morbid peek inside. However. I didn’t dare to look because maybe I want to live with eternal doubt of whether there was a real corpse in it or not. 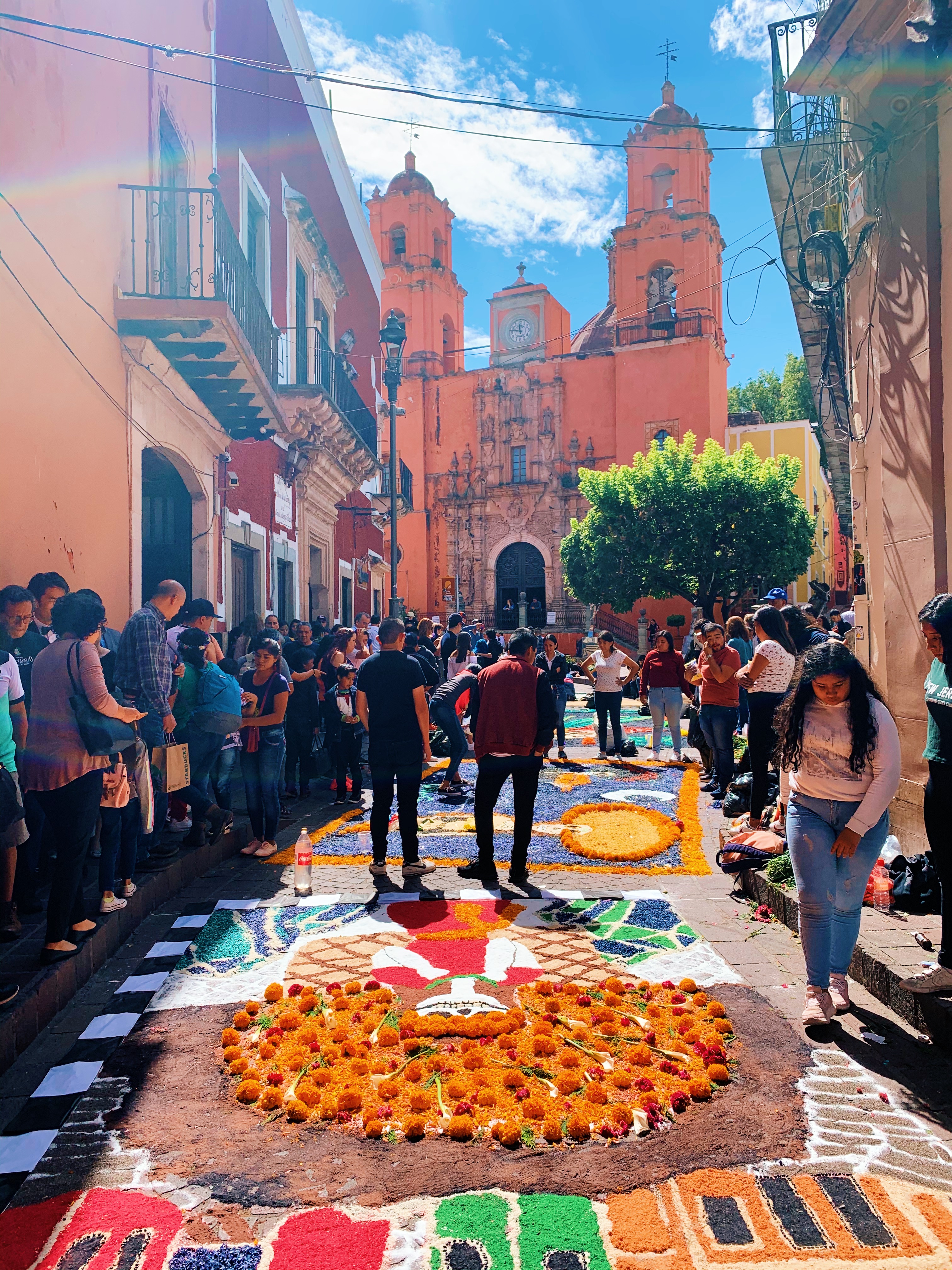 I’m not going to lie — the crowds are big the entire weekend. No matter what time of the day or night it is, you WILL see people out in the streets. There are elote vendors out until late hours of the night. I mean, what else do you need?! But in case you’re taking me seriously, we found the heaviest crowds around midday on November 1 when we were walking around Plaza de la Paz, the biggest plaza in the city, and that same night at the tunnel festival. 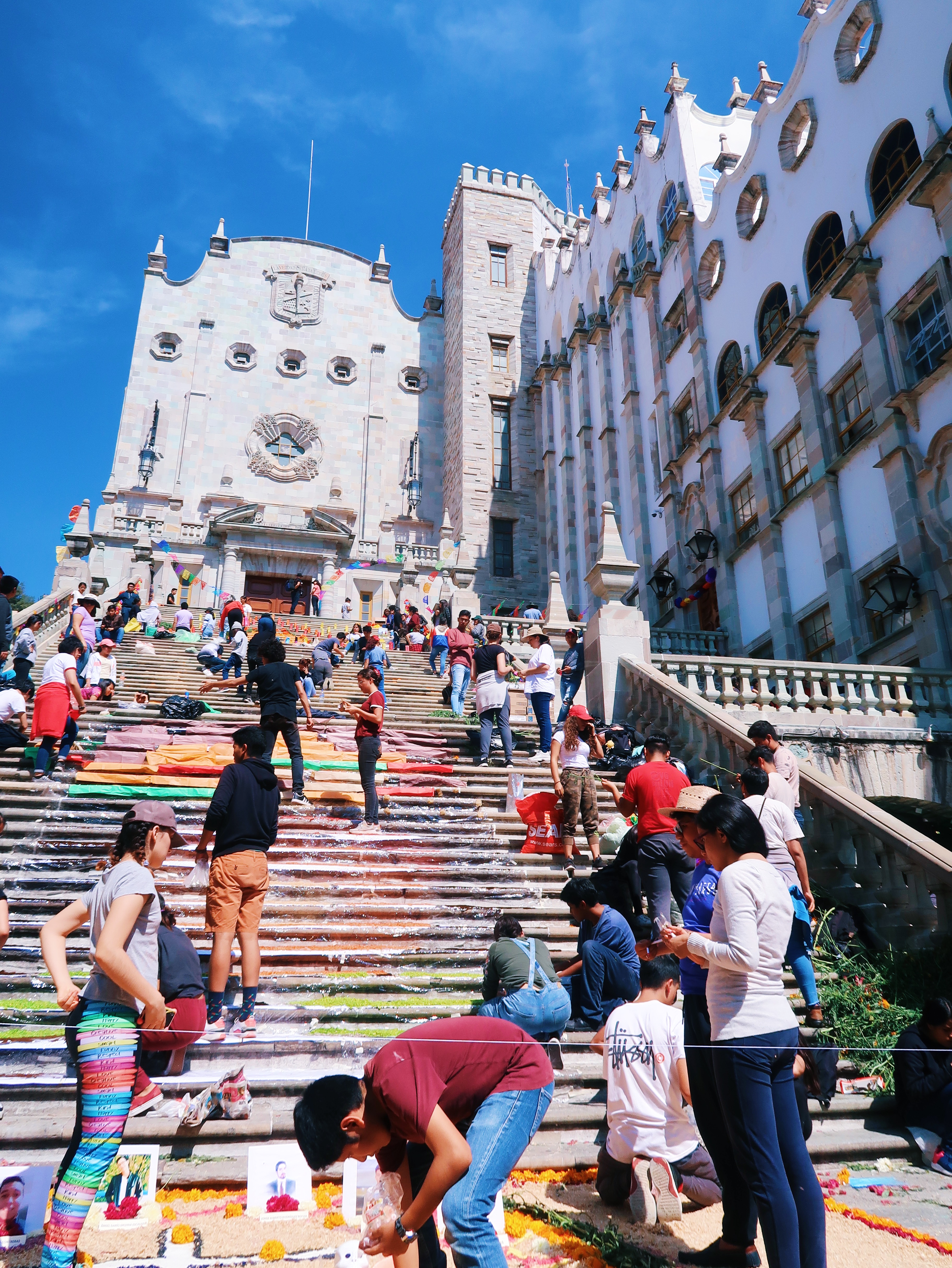 Another sight to see during Día de Muertos is the huge ofrenda put together by the students at the renowned steps of the Universidad de Guanajuato. If you want to get a view of the finished ofrenda, I recommend going up to El Pípila Monument where you’re sure to catch a great view of the whole city! 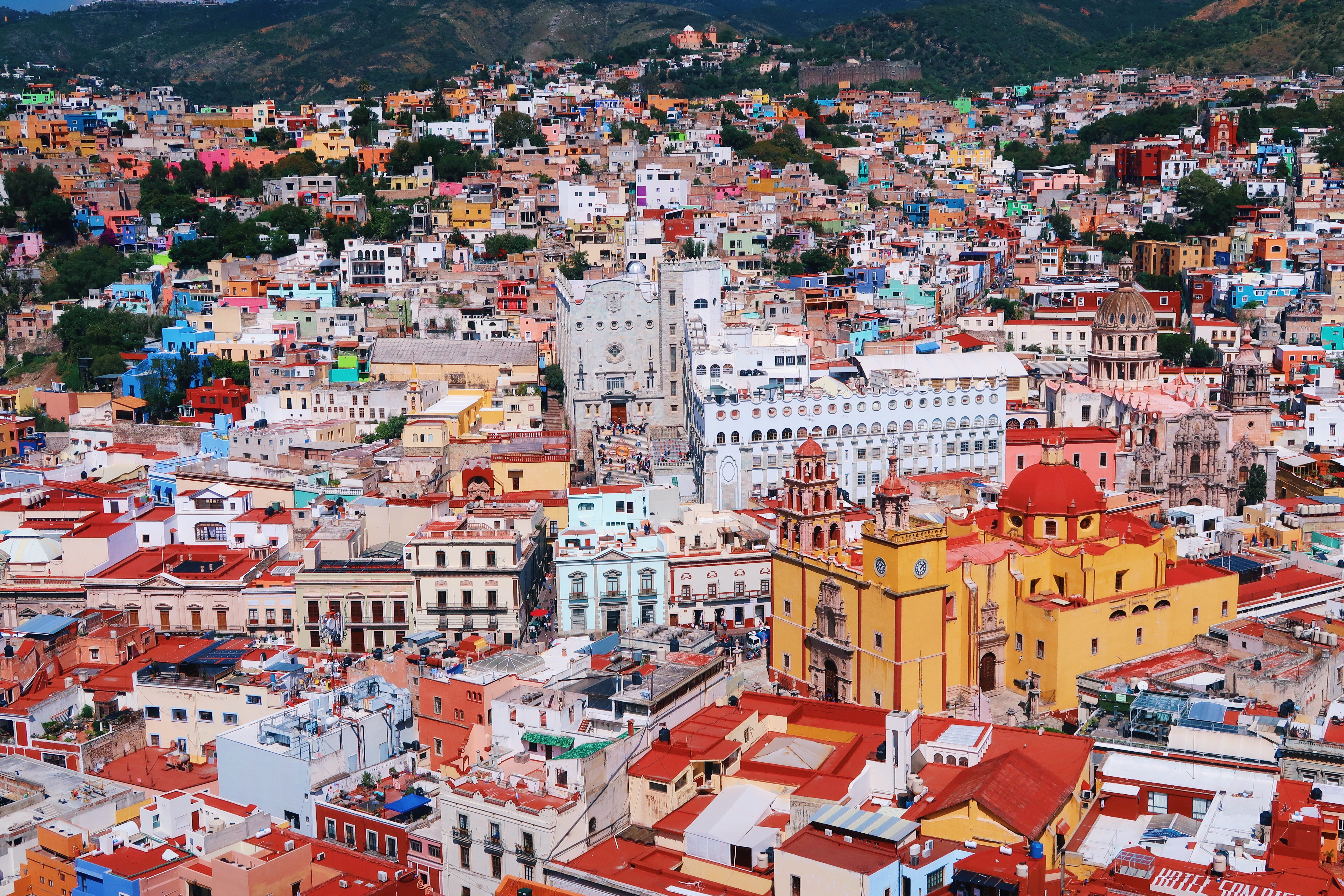 If you’re not convinced of visiting Guanajuato for Día de Muertos, you’re wrong. Just kidding. But hopefully a little bit of my experience connected with you! I looooved being able to experience this popular tradition in México and I know that this experience isn’t for everyone. And really, neither is traveling. Experiencing Día de Muertos in México is a memory I will treasure for the rest of my life. If you made it all the way here, congratulations. Leave a happy face in a comment down below or let me know what you found most interesting about this Mexican holiday? See ya on the next one.

Don’t forget to check out the travel vlog I put together from this irreplaceable trip!

I write. I travel. I obsess about skincare, unicorns and astrology. This is just my little space to talk about it all. You should stick around!